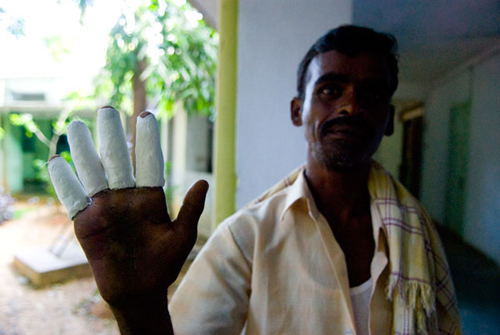 Of course sandals are still the footwear of choice. It may be advanced science and pioneering research in its field, but it’s still India.

“Change your footwear please,” says Hema, a sweet twenty something woman in a sari who presides over the research lab while she finishes up her PhD.

I look down at the shoe rack and see a few pairs of smallish-looking, white women’s flip flops. I look back at Hema’s unwavering smile before I realize she’s serious and kick off my size 13’s. I wedge my foot into the flip flop and feel like one of Cinderella’s evil step sisters with the entirety of my heel still hanging off the shoe’s back as we continue into the lab. We step into the only air-conditioned area in the facility and it’s extra cold since the organism m. leprae, the bacteria that causes leprosy, needs a cooler environment to grow, which also explains why it chooses to locate itself in the skin of a person’s body. The facility is called Karigiri and was founded in 1955 as a research branch of the Christian Medical College (CMC) hospital, its bigger, better-financed sister in the heart of Vellore. Karigiri’s founders wanted it to be placed right next to CMC but the town would have none of it, knowing that they were planning to treat “the lepers.” So instead the government gave them 250 acres of worthless scrubland 20 km outside of town … four km from the nearest existing road. The name “Karigiri” in Tamil means “elephant mountain,” named after the foothill that lies beside the entrance road, a foothill that everyone but me can see looks just like an elephant.

The facility at Kairgiri has pioneered several important accomplishments for leprosy and its treatment. They came up with its multi-drug therapy (MDT) treatment, a cocktail of three drugs (rifampicin, clofazimine and dapsone) that were finally able to completely kill the bacteria within a person, rendering them cured, with a surprisingly high success rate. They were also the first to learn they could grow the bacteria on the footpads of mice, an essential discovery towards being able to test different strains since m. leprae will not grow in a petri dish and the only other animal susceptible to it, the armadillo, doesn’t live in India. Karigiri also invented micro-cellular rubber (MCR), which they use to make shoes for leprosy patients. You see, patients often do not have any sensitivity in their feet due to severe nerve damage and can begin to walk in awkward ways because of it, putting so much pressure on only one part of their foot that it becomes damaged and ulcerated. The special rubber ensures that the weight is distributed evenly across the entire sole and lowers the chance of damage.

Another thing the hospital and its satellite campus, the Paul Brand Integrated Health Center, has changed about the treatment of leprosy is the segregation that was previously implicit. The facilities treat not just leprosy cases, but everything from toothaches to arthritis to diabetes. This has worked towards helping push the stigma out the door because Karigiri provides health care for so much less than the CMC or government-run facilities that the lower and middle class people, those without the benefit of a more advanced education and therefore with more reason to be afraid of leprosy, are consistently coming to receive treatment alongside those with leprosy. The downside of the integration, though (which has now been mandated by the national government) is that field teams are no longer sent out to look for leprosy cases and treat them in their own homes. This leads to later detection times and, therefore, more advanced nerve damage.

Up the stairs on one end of the Paul Brand Center they are dealing with a whole other aspect of pain the disease inflicts. There is the psychology and psychiatry department, a place where patients go to be helped in dealing with the emotionally damaging aspect of their condition.

“The stigma of leprosy is still deep rooted,” says Augustine Valsa, a friendly, frizzy haired lady who remembers my name and reminds me of psychologists the world over.

The first step towards helping a patient, she says, is working on their own self-esteem, convincing them that this disease is not something they deserve or are being punished with by any god, but rather that it is just like any other bacterial infection. Interestingly enough, the words “bacteria” and “germ” don’t even translate well into Tamil. The closest word there is and thus the way that most people come to understand it, is “insect.” Many of them recall insect bites they have had and believe that this must have been the cause of their condition.

“Most of the patients go first to a local healer who uses herbs on them. And herbs do have their place in medicine and can be somewhat effective, but not effective enough to battle leprosy,” Valsa says. “They often don’t come to us until they already have severe nerve damage.”

This nerve damage is something that the doctors at Karigiri are also, in certain cases, able to help. Dr. Ebenezer Mannam, who spends much of his days hearing complaints of aches and pains from old, overworked women, spends his Thursdays doing surgical tendon transfers. This is a 500 dollar procedure (this includes the cost of the three week inpatient physical therapy recovery process) that turns the useless, clawed hands caused by nerve damage into again useful, almost normally functioning parts. A procedure like this can really turn a patient’s life around, says Mannam, making them again able care for themselves and, if they can find a caring enough soul, find employment.